Military and police will work together for security 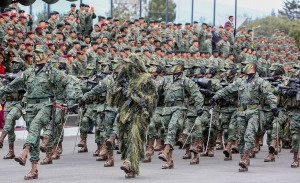 “This is not about a permanent state of emergency, or the militarization of society,” argued the ruling party to carry forward the constitutional amendment that gives way to the participation of the armed forces in internal security tasks, together with the police.

The Assembly adopted the amendment to Section 158 of the Constitution in which it was determined that the Armed Forces have the fundamental mission to defend the sovereignty and “national” integrity (formerly called “territorial”); and added the phrase “and complementarily, support the integral security of the State.”

The goal, according to the report for the second debate of the Casual Commission on Amendments is to optimize the use of resources and cooperate with the integral security of the State in conjunction with the police. Furthermore, the amendment “would seek to ensure a peaceful coexistence, personal integrity and protect the property of citizens.”
Translated into English by Pierina Abad
Source: http://www.eluniverso.com/noticias/2015/12/10/nota/5289564/militares-policias-actuaran-conjunto-seguridad

Unity reemerges in the opposition

Relatives of the 21 detainees agreed to meet on December 18