Minimum amount advised to invest in the stock market is $ 5,000 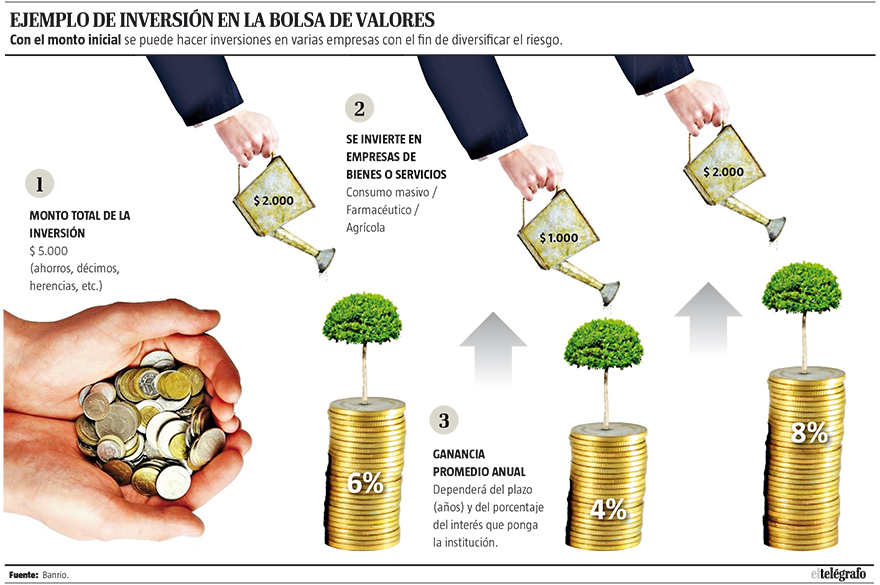 The stock market is an alternative to make the patrimony grow in a sustainable way, it even gives you the opportunity to invest as a shareholder of the most profitable companies in the country. A 65-year-old peasant (protected identity) invested $ 15,000 in the stock market. Part of its investment went to a mass consumption pharmaceutical and government bonds.

Thanks to the profitability of this portfolio, he now receives a minimum of $ 230 quarterly. Another case is that of a 33-year-old boy who received $ 50,000 for his father’s life insurance. He placed these funds in the stock exchange and the proceeds were transferred to his mother. Today he receives $ 800 quarterly.

How does the stock market work?

It is a segment of the capital market in which people who want to invest their money and companies that want to capture it. Here values are negotiated between bidders and plaintiffs through the mechanisms provided for in the Securities Market Law. Gonzalo Cucalón, vice president of the Casa de Valores Association (Asocaval), explained that the securities market directly channels financial resources to productive activities.

“In the traditional system, people put their money in the bank and then the companies request it through credits. While in the stock market, people can invest in shares, bonds and bonds of the State, without the need for the intermediation of financial institutions, “he said. For the activity to be carried out there are regulations and controls by the Superintendency of Companies, Asocaval and risk rating agencies that are based on the Securities Market Law and regulations imposed by the Government.

Those in charge of advising the investor are the securities houses, who will help the investors to choose the best investment strategy according to their goals. Cucalón mentioned that every person who has savings can invest.

A recommended figure is $ 5,000, (in Banrio you can do it from $ 1,000). Through the stock market we have access to companies with triple and double A, where yields are from 6% to 9%. To diversify the risk, the user can invest in an investment portfolio and place their money in several companies, for example: in one of mass consumption, in a pharmaceutical and another part in government bonds (see infographic).

A large percentage of citizens do not know about it and those who have heard about it do not consider it safe because they do not identify its advantages, said Cucalón. In this regard, the Government itself expressed the intention of converting stock exchanges into a profitable alternative to do business and obtain financing. However, the sector is still waiting for its proposals to be taken into account to encourage the sector.

For Walter Spurrier, an economic analyst, incentives must be increased for the private investor to buy shares of multinational companies and for this process to be transparent. The analyst also believes that you have to think in terms of having a stock market with appropriate legislation, protection for minority shareholders, but not that they can block decisions of the majority and certain more stable rules by the Government. The stock market in Ecuador generated more than $ 8,000 million in 2016, equivalent to about 8% of the gross domestic product (GDP). While countries like Colombia and Chile invested 206% and 330% respectively. (I)