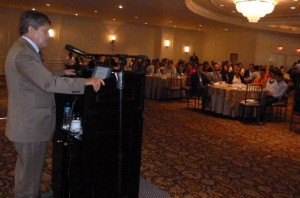 he Minister of Labour, Carlos Marx Carrasco, presented yesterday the topics contained in the Labor Justice and Labor Recognition bill before representatives of private enterprises in Guayaquil. Among them are the elimination of fixed contracts, wage gaps and inefficient dismissal.

Employers expressed their doubts about the disposal of fixed term contracts. Their concern revolves around the type of agreement they could choose if they wanted to replace a worker for a defined time.

Given this, Carrasco said that other modalities will be maintained as an option, among which he mentioned, temporary, seasonal, labor and piecework contracts.

“They ask me here, regarding replacing a person (…), if it would be allowed a contract that would not be of fixed time, but if that person can be hired with a trial period (…) and if this contract can be terminated up to 90 days,” said the Minister.

He also confirmed that breastfeeding women would be included in the ineffective dismissal, figure that protects them from being fired for being pregnant, as union leaders. “Yes, because there’s a two-hour permit for one year, the permit itself is included,” said the Minister.

On the limit of wage gaps, Carrasco said that is about a factor of inequality and ruled out a preliminary calculation of President Rafael Correa, who imposed as the lowest payment $ 1,000 and $ 20,000 the highest. “When Mr. President spoke of 20-1, but as an example, that is not the percentage already defined,” Carrasco said.