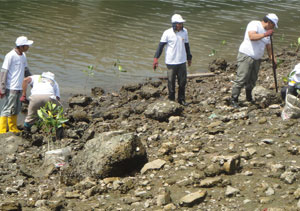 The Minister of Environment Lorena Tapia requested a meeting with the Mayor of Guayaquil Jaime Nebot to know the actions of the Municipality in the Estero Salado (Salty Estuary by its Spanish name). The encounter was to clarify official information received by the Municipality of its responsibility in the control of domestic wastewater discharges that are generated to that sea branch.

At the meeting, which was held in the Mayor’s office, the Minister learned about the roadmap that the Municipality has proposed for solving the problem of pollution sources in the Estero Salado.

According to Tapia, it was agreed that the Ministry of Environment will verify what has been executed and will oversee the new works planned by the Municipality. For this, a technical committee will be formed, which will follow up these commitments to strengthen the management of the Ministry in Guayaquil .

By the environmental conditions of the Estero, the Government implemented the ‘Ecological Guayaquil’ project, which seeks to decontaminate the Estero within the city. The purpose is to reduce pollution sources until 2017.