Minutes on Jaime Roldós´ accident were handed over to his family 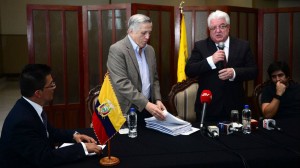 The documents were handed over to Leon Roldós Aguilera, and Santiago Roldós, brother and son of the former president respectively, in a ceremony at the Libertad II Army Division, in Guayaquil´s downtown.

A bulletin of that State´s body details that four sets of minutes of the meetings of the National Security Council (COSENA for its Spanish acronym), before the death, and one of the “first meeting of the same body conducted by the government of President Osvaldo Hurtado.”

Cordero did not disclose the contents of the same, because the Attorney is investigating the plane crash that occurred in 1980. León Roldós said he would not pronounce until reviewing the information of the documents, and he will later ask the dossiers because he only received the minutes.

Instead, Santiago Roldós said he was surprised by the presence of the press at the event, since he considers that the matter should be treated with “discretion and professionalism.”