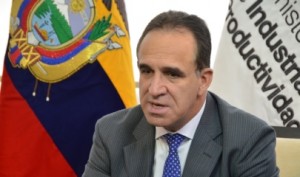 The Minister of Industry and Productivity, Ramiro Gonzalez, said that investment in Ecuador would be allocated unevenly. In Quito and Guayaquil it exists more economic dynamism than in the rest of the country. For this reason, the Government announced yesterday that it will reform the Production Code and the changes soon will be announced.

The Minister of Industry and Productivity indicated that the current legislation does not encourage in a 100% the investment in the country, according to the Web Ecuadorinmediato.com.

Gonzalez spoke of public-private partnership investments, which the business sector suggested before.

The reforms would go through a simplification of procedures, for example in health registration, as well as boosting the undistributed workers profits ($ 10,000 million), to be reinvested in the country.