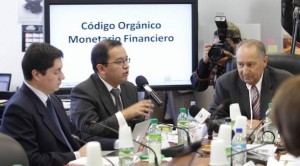 The Monetary and Financial Code has generated interest from various sectors, because of issues such as the creation of a Board of Monetary Regulation with extensive features, or the regulation of the liquidity in the economy and the banking system.

The project consists of 591 articles and provisions that must be analyzed and discussed in a maximum of 10 days by the Commission of the Economic System, before it passes to the Plenary Assembly. The short term is because the text was sent by the Executive as an urgent project on economic matters.

On average, the assembly have eight minutes to analyze each on of the articles and provisions included in the text. “It is absolutely irresponsible,” said Assemblyman Ramiro Aguilar (former SUMA), member of that committee.

In addition, during this time the assembly must receive people who want to express themselves on the subject, as representatives of banks, insurance companies, among others.

The project must be approved within 30 days of its reception in the Assembly, i.e. it has a deadline until August 25.

The SBS will audit the account of Seguros Bolivar