Multilateral credit to Ecuador may increase 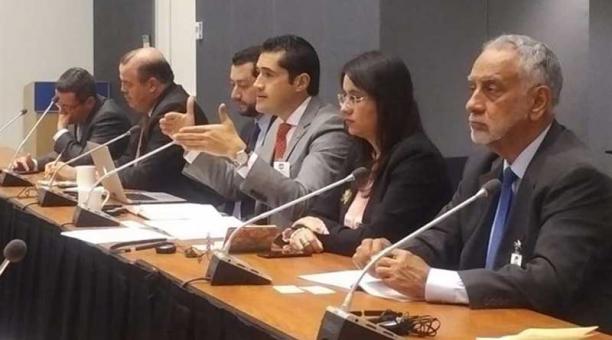 The tour of the finance and hydrocarbons ministers and the head of the Central Bank began on Monday, June 11, 2018, in Washington and included meetings with four multilateral organizations.

These are the World Bank (WB), the International Finance Corporation (IFC), the Inter-American Development Bank Group and the International Monetary Fund (IMF). In the economic plan of the Government, President Lenin Moreno raised as one of its axes to improve the conditions of indebtedness.

USD 9 500 million in financing needs are projected for this year. In this context, agreeing with the multilaterals would lower the cost of financing for Ecuador. The agencies currently offer rates between 2 and 3% and payment terms of between 15 and 20 years. It is a more comfortable debt compared to that achieved through bonds, for which the country paid rates between 7 and 10% since 2014, when it returned to international markets.

It would also get better payment terms with respect to credits with Chinese entities. The loan of USD 150 million from the Chinese bank ICBC in 2017 was for five years and a rate of 6.20%. However, there are factors to take into account to increase the amount of your debt with multilaterals.

According to Finance, this debt is USD 7,491 million, up to April 2018. To meet those fiscal needs, there are spaces to increase access to financing in organizations such as the World Bank and the IMF, said Augusto de la Torre, former head of the Bank. World for Latin America.

Ministry of Finance Notes that Ecuador has underutilized its quota with this agency, which provides technical assistance credits, for projects and other quick disbursements that could be used to strengthen fiscal accounts. Currently, the World Bank has a portfolio in Ecuador of about USD 1 billion in investment projects with the central government, through the International Bank for Reconstruction and Development (Birf), and with sectional governments.

The communication department of the agency confirmed that recently the entity raised the quota for the country in USD 500 million, to include two new projects. But if Ecuador wants to access a fast-disbursing loan – which has more space than that for projects – it would need a certification that macroeconomics is in order.

It comes from the IMF, adds the former head of the World Bank. “If Ecuador had a fiscal program with the approval of the IMF, it could access this financing,” he says. The rapprochement with the IMF could also help the country to access two types of additional credits. Miguel Ricaurte, ex-delegate to the IMF for Chile, points out that one of them is a Flexible Credit Line (LCF) of the IMF, which may take six months to materialize.

“It can be compared to an overdraft line in the bank, but they are usually very small amounts. Colombia, which has a larger economy than Ecuador, was recently given USD 2 billion, “he says.

The other option is the credit known as ‘stand by’, which takes place in less time and which the country can use to fill the cash flow, to solve balance of payments problems, says Ricaurte. It took Argentina, which recently obtained USD 50 billion, for three weeks of negotiations and a plan of strong fiscal adjustment.

The amount will depend on the quota or shares that the country has in the IMF, known as giro rights. In Argentina, the entity granted 11 times more quota, but that is not common, says Ricaurte.

On average, the entity can lend between four and seven times more the right of rotation or even less. Everything will depend on the negotiation to which the countries arrive. Ecuador’s remittance rights amount to USD 990 million. At the meeting of ministers yesterday with the IMF, the possibility of requesting support for technical assistance was addressed, the entity said in a statement.

With other entities such as CAF – Development Bank of Latin America – and the Inter-American Development Bank (IDB), however, Ecuador is at the top of the quota, said Carlos de la Torre, former finance minister.

“In my management they were clear in saying that they could not raise the quotas. It does not depend on a negotiation but on the portfolio. If they increase their capital they can increase the quota “. (I)

The rate at which the country grows is insufficient