Narcos who used the port were arrested 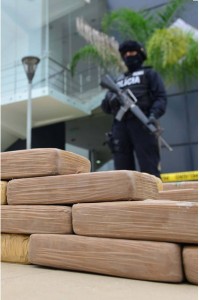 One detainee and 329 packages with 380 kilos of cocaine seized are the result of the operation Swan 3, executed by the Anti-Narcotics Investigation Unit of the Police, which allowed the dismantling of a band dedicated to the alkaloid traffic through the seaport of Guayaquil.

According to the investigations, this organization hid their merchandise in containers carrying traditional export products that were bound for the United States and Europe.

Police reported that the gang used as a collection point a home located in El Cisne sector, because of its proximity to a estuary. From there the drug was transferred through trycicles to the estuary, then by boat to ships anchored in the quarantine zone.