National Assembly approved a new law for the electricity sector 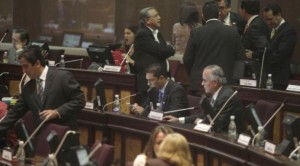 With 88 votes in favor and 23 against, the plenary of the National Assembly yesterday approved the draft Organic Law of the Public Electricity Service.

After nearly four hours of debate with the participation of 21 assembly members from the ruling party and the opposition, the approval was given.

Deeply on controversial items would have not been addressed, like the number 24, which states that the Ministry of Electricity “may authorize the activities of generation, transmission, distribution and marketing, import and export of the electricity service and the public lighting system between state companies of the States in the international community.”

According to these, any power station or distribution and marketing company shall be managed and operated by international SOEs that reach an agreement with the State.

The project, that must be reviewed by the Executive power, would also transform in 365 days all the distribution companies like Empresa Electrica Quito in public companies, leaving regional governments out of their administration.