The National Assembly once again entered into a legal conflict derived from a precautionary measure granted in favor of the Pachakutik movement, which blocks the intention of the opposition to know and decide on the report presented by the multi-party commission that recommends the removal of Guadalupe Llori as president of the Parliament. 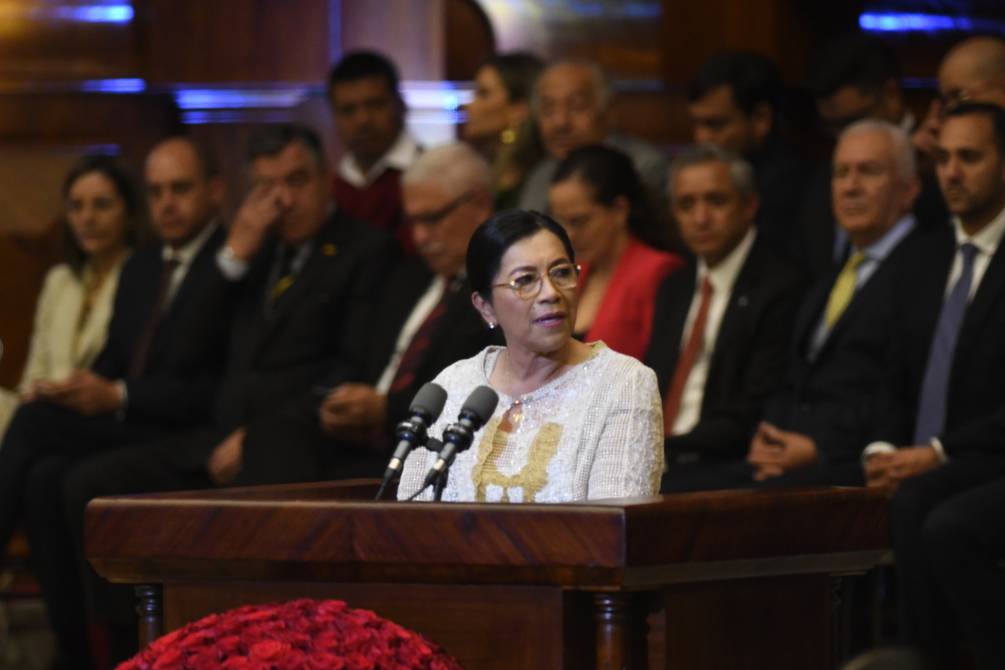 A precautionary measure issued by the Quitumbe Criminal Judicial Unit orders the National Assembly to refrain from knowing, dealing with and resolving the report of the multi-party commission that recommended the dismissal of Guadalupe Llori as president of the Assembly.

This May 27, a judge from the Quitumbe Criminal Judicial Unit in Pichincha, Pedro Troya, accepted the request for precautionary measures proposed by the Pachakutik movement, for violating the right of the political organization by placing as a member of the ad hoc multi-party commission to Peter Calo (PK-R), when he did not have the approval of the political party or the bench.

The multiparty commission was appointed by the plenary session of the National Assembly on April 26 to process the complaint against Guadalupe Llori filed by Assemblyman Esteban Torres (PSC), for alleged breach of duty. The commission concluded the investigation and approved the report on May 25, recommending the dismissal of Llori in her capacity as president of the Assembly.

In his ruling, the judge ordered the members of the ad hoc multiparty commission to refrain from dealing with any issue brought to their attention, because its formation occurred without respecting the representation and the right to democratic decision of the Pachakutik movement. He also orders that the presidency and the plenary session of the Assembly must refrain from knowing, dealing with and resolving the report issued by the multi-party commission, approved on May 25.

For the representatives of Pachakutik, Sofía Sánchez and Salvador Quishpe, the judicial decision on the constitutional action is a triumph, and a precedent was generated in the Assembly, because “everything carried out by the multi-party commission, created illegitimately and illegally, will no longer be able to keep acting. And the report that was released a few days ago will not be known in plenary, because the commission was not created in a democratic manner, respecting political organizations,” said Sánchez.

Quishpe stated that the precautionary measures not only enforce the rights of the Pachakutik movement, but also protect “the rights that all movements and political parties have from now on: when a multi-party commission has to be organized, it will have to be respected, as pointed out by constitutional judges. In his opinion, with the judicial decision the multi-party commission is “pulverized”.

The national coordinator of Pachakutik, Marlon Santi, said that a group of friends called a multi- party commission cannot be accepted in the Assembly when the structures of the political parties and movements have not made that decision. The precautionary measures granted give reason to the claims and will demand respect for the constituted organizations and respect for the rules of the Legislative Administration Council.

The coordinator of the caucus of the Social Christian Party (PSC), Esteban Torres, affirmed that the precautionary measure has no legal validity, and that the Assembly must deal with the report presented by the multi-party commission and vote on it when it has the opportunity to do so.

Torres recalled that in the past former Assembly members came to the Legislature with precautionary measures in hand to prevent their removal, and the plenary session, with the arguments of the current legal coordinator of the Assembly, Santiago Salazar, never gave way to that and there were never any consequences for an assemblyman. So why should the setting be any different this time? he asked.

In this case, added the legislator who accused Llori, the Assembly must come out on its own. He affirmed that the Government is behind all this, because it has always indicated that it opposes Llori’s impeachment process, because of the judicial actions that have not been rejected by the Government and because of the control it has over the Judiciary Council. It is clear that they are trying to keep Llori in the presidency, he said.

Legislator John Vinueza (EU), a member of the multiparty commission, rejected the legal action and pointed out that Assemblyman Peter Calo may not agree with an action by a caucus, but that does not mean that he ceases to be part of a movement or who has forgotten his origins.

The representative of the UNES caucus, Ronny Aleaga, rejected the judicial action that seeks to interfere in political decisions of the first function of the State, and invited all political forces to reject this type of act.

He said that before the country it is evident that the president of the Assembly, Guadalupe Llori, resorts again to justice to solve an internal political problem of the Legislative, which is disastrous.

Faced with the facts, Aleaga commented that the only way out that exists is the self-convocation to the plenary session to hear the report of the multi-party commission, because there are several pending sessions that must be reinstated and in which the agenda cannot be modified.

The National Assembly must not only hear and approve the report of the ad hoc multiparty commission that recommends the dismissal of Guadalupe Llori, but also warn the Judiciary about an interference in political decisions of the Legislative. (YO)