Ecuadorians Álex Lucitante and Alexandra Narváez , two young indigenous people from the A’i Cofán native people, are the only two Latin American winners of the 2022 Goldman Prize for having achieved a historic legal victory that allowed their territories in the Amazon to be protected from gold mining from Ecuador. 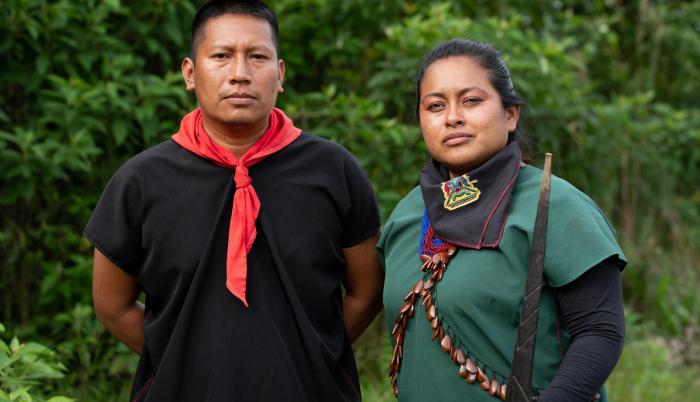 Along with the indigenous couple from Ecuador, among the winners announced this Wednesday of the Goldman, considered the Nobel Prize for the environment, there is also the American Nalleli Cobo , the Dutch Marjan Minnesma, the Thai Niwat Roykaew, the Australian Julien Vincent and the Nigerian Chima Williams.

Thanks to the leadership of Lucitante and Narváez, the Ecuadorian Justice ruled in favor of the A’i Cofán indigenous people by annulling 52 illegal gold mining concessions granted without the consent of the native community of Sinangoe, located at the foot of the Andes, to the outskirts of the Cayambe-Coca National Park.

This victory achieved in 2018 in court made it possible to protect nearly 32,000 hectares of virgin and biodiverse tropical forest in the headwaters of the Aguarico River in Ecuador, according to the organization of the award in a statement.

Lucitante, 29, a law student, comes from a family of traditional healers and is a member of Alianza Ceibo, an indigenous coalition uniting indigenous nationalities in the northeastern Ecuadorian Amazon to protect their territories, rights, and cultures.

For her part, Narváez, 30, formed the indigenous guard in 2017 to monitor and stop illegal activities within her territory and also joined the Shamec’co women’s association, which seeks strategies to continue caring for the territory and the legacy of their children.

In 2017, the Sinangoe guard began detecting makeshift mining camps along riverbanks in remote sections of the community and within the national park, with illegal loggers, poachers and artisanal gold miners actively operating. .

Following the discovery of the mining operations and concessions, Lucitante and Narváez sought to unify the community and formulate a plan to protect their territory.

Thus, the community, with the support of allied organizations, developed a strategy to monitor the area impacted by mining with technology and tours of the indigenous guard and redoubled patrols on foot and by boat to detect and report mining, logging and illegal fishing in the territory.

While Narváez participated in the tours of the guard and served as a spokesperson for the community, Lucitante participated in legal and media strategies to add support, until he obtained the adhesion of 60 national and international organizations and 14 local communities to the campaign.

In May 2018, Sinangoe filed a lawsuit against the state for violating their rights as an indigenous community and granting mining concessions without the consultation or consent of the Cofán, resulting in the historic ruling in favor of the indigenous people.

The sentence closed the door to gold mining in the ancestral territory of Sinangoe, home of the Cofán, whose territory is located within a biodiverse tropical forest at the headwaters of the Aguarico River , a tributary of the Amazon River.

CONNECTED TO LAND AND WATER

The Cofán are a small indigenous people, made up of 1,200 people, and their culture is deeply connected to the land and water, for which their way of life depends on rivers and forests, with a reliance on subsistence agriculture, hunting and wild gathering.

For Lucitante and Narváez, it is the A’i Cofán community of Sinangoe that deserves this award, for which they decided to donate the economic prize, so that it is transferred directly to a civil society organization made up of communities of four indigenous nationalities from the Ecuadorian Amazon.

It is the fourth time that the Goldman Prize has been awarded to Ecuador after it was already won by Luis Macas (1994), Pablo Fajardo Mendoza and Luis Yanza (2008) and Nemonte Nenquimo (2020).

PSC repeats the formula in Guayaquil: Cynthia Viteri is going for re-election to the Mayor’s Office