National Assembly shall sue deputies that ceased the court in 2004 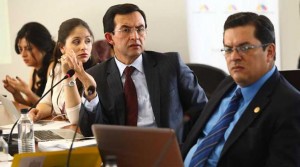 For the first time in the legal history of Ecuador, the National Assembly will apply the principle of repetition, in order to recover money of the state. This time, the action will fall on the 52 former deputies who in December 2004 deposed judges of the Supreme Court of Justice, also on 55 former deputies who did the same with former judges of the Constitutional Court.

In November 2013, after a nine-year dispute, the Ecuadorian State was ordered to pay USD 15 million in compensation for the dismissal of the 27 former constitutional judges and nine former constitutional members, on the grounds that there was violation of rights. So far, USD 12,353,709 have been disbursed and the State has to pay 3,496,116, which must be canceled until March 30, 2016.

The Commission for Justice and State structure, headed by Mauro Andino (of the ruling party), yesterday approved two reports where the possible perpetrators were identified.

Once the Justice Commission approves the reports and forward them to the President of the Assembly, the responsibility to follow the principle of repetition is under Gabriela Rivadeneira.

Rivadeneira, as the highest authority, shall set the date for the plenary to accept the resolution. Then, with the Attorney General she shall submit a complaint before the Provincial Administrative Court, against the deputies whose names appear in the two reports.