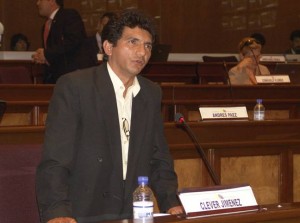 In order to treat a draft resolution backing the refusal of the Government regarding the precautionary measures requested by the Inter-American Commission on Human Rights (IACHR) in favor of Assemblyman Cléver Jiménez, Gabriela Rivadeneira, President of the Assembly summoned a meeting of the plenary for tomorrow, at 10:45.

The theme was denied twice with an average of 80 votes to be treated by the officialism. In recent weeks, the Pachakutik party tried to include the item on the agenda in two sessions in order to require the State comply with these provisional measures.

For the officialism, the Commission has no jurisdiction to grant such measures, therefore, the sentence of 18 months imprisonment against Jimenez is enforceable.

The document that will be discussed tomorrow supports in two articles the government’s position and urged the commission to obey their pronouncements to the American Convention on Human Rights and its statute.