With the National Weaving of the Fabric, the Canton Biblián will celebrate the seven years of the declaration of the toquilla straw hat as Intangible Heritage of Humanity. Artisans from 16 cantons of Azuay, Cañar, Manabí and Santa Elena will participate. 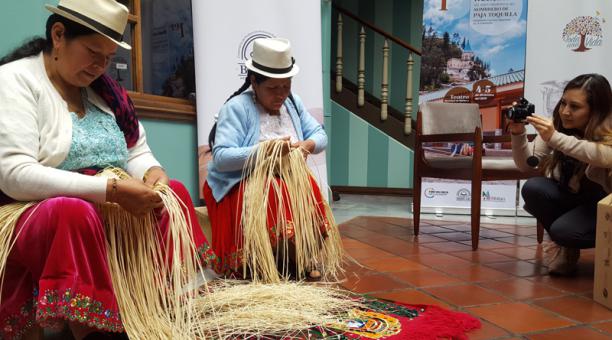 Biblián is the only canton in the province of Cañar that has consolidated the production, marketing and export of the hat.

This was achieved after the distinction granted by Unesco on December 5, 2012. Most of the families in this canton depend on the weave of the straw. There are 10 associations –among small and large-, but the Father Rafael González Artisan Production Cooperative has achieved more results.

He was born in 2015 on the initiative of the Municipality, to enhance this art. Group 120 members, of which 80 are active.

In these seven years they have maintained a sustained work in organization, training, workshops, fairs, promotion and market openings. It is the only cooperative with its own hat brand, called Bibilak, and in the last four years they exported 26,000 units to the United States, Italy and Spain.

In 2020 they will grow more because they opened markets in Bolivia, Mexico, France and China, said President Martha Lema.

The Cooperative buys the hats from the members and processes them to give them the finishes. They have a workshop equipped with tools and machinery. Thursdays open the doors to tourism.

Groups of artisans meet in the workshop in the ‘minga del tissue’, to show the technique of this trade to visitors.

This growth and work motivates us to continue, says Lema, who together with the Municipality and the zonal coordination 6 of the National Institute of Cultural Heritage will hold on December 4 and 5 the First National Meeting of the Tissue.

The objective will be to highlight the importance of this trade and position it as an alternative that boosts the economy of hundreds of families in the four provinces and moves tourism, said Guillermo Espinosa, mayor of Biblián. The event will exchange experiences among artisans about tissue techniques, organizational processes and ventures; and among local governments about the role they play in the development of this activity.

As part of the fabric’s production chain, Santa Elena will participate with issues related to the natural fiber grown in this province. While the cantons of Manabí, Azuay and Cañar will do so with the fabrics.

Within the cultural agenda there will be an exhibition and sale fair for toquilla straw and alpaca wool, from artisans from the three provinces. In addition, a fashion show of traditional costumes of the Cañari culture made of straw and wool. The novelty will be the mishada contest, an ancient practice that consisted of the gathering of artisans to compete for who weaves the best hat faster.

In general, Montecristi weavers produce hats with very thin strands of straw, while those of Azuay and Cañar use somewhat thicker strands. For Mayor Espinosa, the Meeting of the Fabric will be a space to position this canton in the national context and attract tourism.

Therefore, they prepared tours – with visiting delegations – for important sites such as the Sanctuary of the Virgen del Rocío. There will also be tasting of typical food and dances.