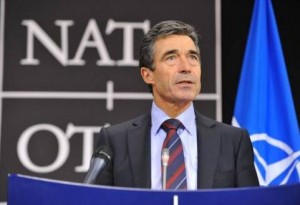 NATO will expand military presence “by land, sea and air” on the most vulnerable European zones to the clashes that occur in Ukraine.

The General Secretary of the Alliance, Anders Fogh Rasmussen, advanced yesterday those intentions, which shall be specified “in the coming days”, without giving further details.

NATO and the rest of the international community, have extreme caution until the key meeting tomorrow, on which the U.S., the European Union, Russia and Ukraine will try to find a political solution to the conflict.

Meanwhile, the organization will deploy more troops in the area, will increase the number of aircrafts and will move ships to the Baltic Sea, at the Eastern Mediterranean “and elsewhere as needed,” said Rasmussen.

He also warned that more steps will be taken if necessary and again appealed to the Russian withdrawal. “I call on Russia to be part of the solution, stop destabilize Ukraine, to withdraw its troops and to not support the pro-Russian separatist militias,” he said.