Nebot signs contract for studies of the alternative way and connection to the new airport. 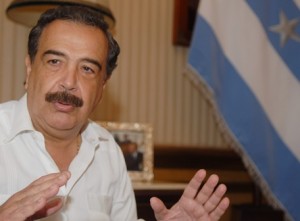 Mayor Jaime Nebot, signed the contract for studies of the alternate way and the connection with Daular, where the new airport of Guayaquil will be built .

Guayaquil Airport Authority signed a contract yesterday with Daular Airport Road Association, a company that will conduct the studies and designs of the alternate route, and the connection with Daular, where the new airport of Guayaquil will be built.

The mayor of the city, Jaime Nebot, pointed out that the construction of the alternate highway is necessary because the urban development of the way to the coast saturates the road.

The studies will be completed in twelve months, and once completed, the next step will be the construction of the road, said Nicolás Romero, manager of the Port Authority of Guayaquil.

The highway would be cofinanced by the City and the Airport Authority at an early stage. The second phase would be included in the concession of the new airport, which is expected to be ready by 2025.

The mayor said that in the coming days the contract for studies of the first airborne passenger transportation system route will be signed, while next week the studies for the construction of two bridges that join Samborondón and Daule will be submitted.

Nebot will not be present in formal ceremony of October 9