Netanyahu rejected Obama´s reviews on his speech to the Congress 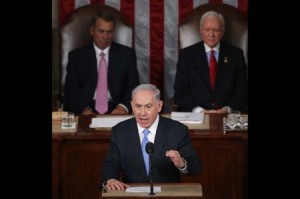 Israeli Prime Minister Benjamin Netanyahu today rejected the reviews the US President, Barack Obama, made on his speech before the Congress, in which he warned that the agreement on the Iranian nuclear program will not prevent Tehran from getting the atomic weapon.

Obama said that the speech contained “nothing new” and that “the Prime Minister did not offer any viable alternatives.”

Netanyahu insisted today that he “presented a viable alternative that would impose greater restrictions on the Iranian nuclear program.”

“I also asked the Group 5 + 1 (China, USA, France, UK, Russia and Germany) to link the lifting of sanctions to the fact that Iran abandons its support to terrorism in the world, its aggression against its neighbors and calls to destroy Israel,” said the Israeli leader.

Netanyahu also said having received “encouraging responses from Democrats and Republicans” on his speech. “They understood that the current proposal would lead to a bad deal and that the alternative is a better deal,” he said.

Netanyahu reaffirms relations with the US. and will speak before Congress