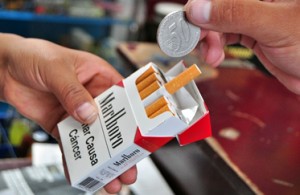 Ecuador raised taxes to discourage the consumption of harmful products such as cigarettes and to promote the national industry,upon taking effect this December 30 the Organic Law on Production Incentives and Tax Fraud Prevention.

According to the Internal Revenue Service (SRI by its Spanish acronym), this law “has no revenue purposes, because it focuses on promoting the change in the productive matrix” and “discourage consumption habits that harm the health of the population.”

Among the measures is the tax increase on cigarettes from 9 to 13 US cents per unit. The suggested retail price of a pack of 20 cigarettes until Monday, December 29 was $ 3.60.

In addition, the new law imposes a tax of 100% on kitchens, water heaters and other gas appliances, to favor the acquisition of induction cookers and electric showers, which with this rule will cease paying the VAT (12%) and the outflow of foreign exchange tax (5%).