As the sun rose, tireless Haitian rara musicians and their throng of fans followed them. A man danced in skates for hours without stopping. While two police officers sipped coffee, the partiers sang, “the day is coming”.

The festival called J’ouvert has ended, but the giant parade is still coming. Many of the musicians belong to a popular band in Brooklyn called DJA-rara, some of 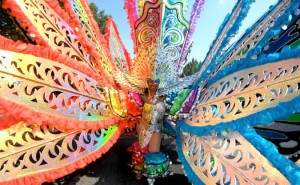 them are just preparing for the annual West Indian American carnival.  The word J’ouvert belongs to the French words that mean “day break”. The festivities start during the night and last several hours of Labor Day, they features steel drum bands and the partiers with painted faces march at the rhythm of the music. The long dance starts at the Grand Army Plaza and goes through Brooklyn’s Caribbean neighborhoods.

This performance belongs to the rara, a popular Haitian tradition that arrived into New York in a few decades ago. Now regular performances are held in Central Park and Prospect Parl, there the musicians play drums, tin horns and an instrument made from bamboo or a plastic tube, the sounds produced cause entire crowds to move and dance.

The music in Haiti and New York has improved thanks to the carnivals and its parties, but it has also become a mean of social protest and popular expression. Members of the DJA-rara band were sad due to the luck of their brothers in the earthquake that devastated their homeland. Some of the newest band members joined the group after leaving Haiti.

However they set aside those worries minutes before midnight on Sunday, when, at the corner of Flatbush Avenue and 26th Street, Lukens Destine began playing his drum, and for the first time in a long while, the crowd started to jump and dance.

Suddenly, a man with a gold carnival mask appeared, a car alarm went off, and Jean Baptiste, a real state broker, said, “It puts us back home”. Soon the few dozens in the crowd became more than a hundred. Wilfrantz Fanfan, one of the DJA-rara’s leaders said that people joined as they walk through the streets of Brooklyn.

Patricia Moreau was at the front of the procession carrying her 3-year-old son and her two teenage daughters. Meanwhile Mr. Moreau watched as the crowd danced past police barricades. During the party a mysterious stranger joined, Vendrix Desinor who wore roller skates and had wings attached to the Haitian flag he wore as a cape. At some point, he rode a bicycle and almost crashed on various occasions with Ms. Moreau’s son’s stroller. For a while he danced in his socks as the procession advanced onto the Eastern Parkway. 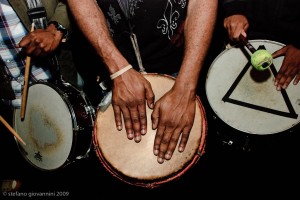 The band players switched their instruments, but rarely stopped playing; they used the konet, tin horns that are the signature of Haitian rhythmic style known as hocketing. Drinks were poured into small plastic cups and the smell of marijuana trailed with the march.

While marching at the Grand Army Plaza, DJA-rara encountered another rara band performing musical duels that lasted for a while. But on Monday 2 a.m. the J’ouvert festival officially started, the police separated each band from the next.

Fanfane Colon, 33, had been performing in this procession since she was 16, thanks to her grandmother who helped her develop the love for rara. Fafane said that the festival used to be marked by episodes of violence but now it felt much safer.