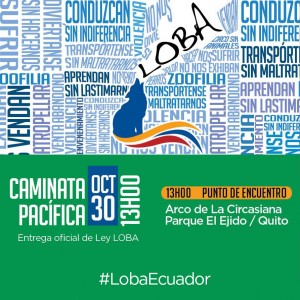 This October 30 will be held the ‘Pacific Walk #LOBAEcuador,’ which aims to formally deliver the draft Organic Law on Animal Welfare (LOBA for its Spanish acronym) to the Assembly. The meeting point will be the Arco de la Circasiana in El Ejido park, in Quito, at 13:00.

The document, which was prepared by six NGOs, poses the application of standards of “animal welfare,” a term which describes itself as “a permanent state of every creature that is free of hunger, thirst, malnutrition, disease, fear, anguish, restlessness, and can express itsnatural behavior.”