Nicolas Maduro gets most mayors in Venezuela 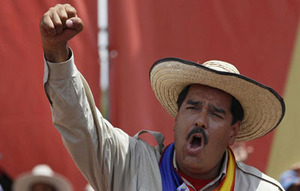 Nicolas Maduro carried out its first electoral test this Sunday, after seven months of a government marked by economic chaos and populist works he remains the most voted political force, which met the same control of most municipalities in the country. However, the opposition won in five major cities.

The parties of the government regime totaled 49.2 % of votes against 42.7% for the opposition, said Tibisay Lucena, the National Electoral Council (CNE), in its first report on 257 of the 337 municipalities showed already “irreversible” results.

But the opposition also had its triumph, because they got two “crown jewels,” the mayor of the metropolitan district of Caracas and Maracaibo Petroleum, the country’s second city, which were joined by the three other most populous cities: Valencia, Barquisimeto and Barinas, Chavez family home.

After the vote, “the message is clear. Venezuela is a divided country, it has no owner. We are building an alternative and will not rest until Venezuela is united, unity is a value equity to be achieved,” stated Henrique Capriles, leader of the opposition, during a press conference.