University of Guayaquil elected representatives of the university council 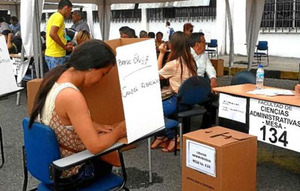 Elections in the University of Guayaquil

The University of Guayaquil lived an electoral environment yesterday when students gave their votes to choose the dignities to represent them in the university council by faculty.

This is one of the actions taken at the top center to meet one of the causes that led to the intervention of the university, due to extended student government, which in some cases have reached five years.

However, the morning session was marked by absenteeism and lack of information. Around 13:00 they had just received between 15% to 20% in the polls to vote in each faculty. According to figures of the Federation of University Students.

While Jorge Kalil, head of the Oversight Committee of the Board of Higher Education reported that on Thursday the entity will release the plan of excellence to be carried out in the center next year.