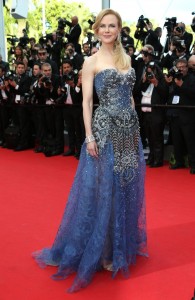 Nicole Kidman at the opening of the 67th Cannes Film Festival

`Grace of Monaco´, a film produced by Oliver Dahan and starring Nicole Kidman, has been harshly criticized in the Cannes Film Festival. The story of a princess trapped in a golden cage, has created controversy, especially because the Grimaldi family has come out against the film, claiming that it is based on “erroneous  historical references and literalilly dubious.”

The passage of the actress through the Croissete captured by the eyes of the papparazzi. With a long blue dress, her celebrated beauty dazzled everyone who was present at the 67th edition of the Cannes Festival, held in the small town of southern France. “I am very happy to be here,” were her words at the inauguration.