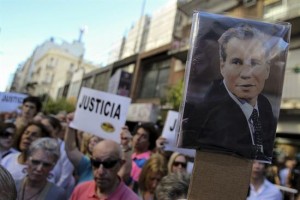 The former Argentine intelligence agent Antonio ‘Jaime’ Stiuso will be called to testify, said yesterday the prosecutor in charge of the investigation of the death of Alberto Nisman, who would had worked closely with the former agent to accuse Iranians of the anti-Semitic attack of 1994 in Buenos Aires.

Prosecutor Viviana Fein, who investigates the death of Nisman, summoned Stiuso for Thursday but the who came was his lawyer, Santiago Blanco Bermudez, who pointed out not knowing if his client is in Argentina.

The appointment would be made, according to the press, due to the result of tests that would confirm that Stiuso would have spoken by phone with Nisman for about 12 minutes on the Saturday night of January 17, to be found dead on Sunday.

The prosecutor said that the lawyer would have indicated that Stiuso would provide testimony and warned that a hearing will be set when the Ministry of Intelligence expressly reports the waiver of confidentiality.

Furthermore, Elisa Carrio, deputy for the Civic Coalition, expects to put criminal charges against the President of Argentina and other top officials of her government, on alleged concealing in the death of Nisman, confirmed her office to the AFP.