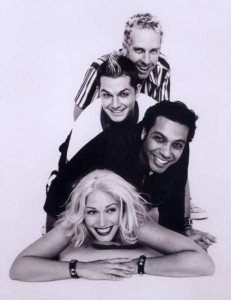 After 10 years of waiting, No Doubt is finally going to give us some new tunes. We have not heard anything from the band since 2001, when they released their album Rock Steady and the voice of Gwen Stefani singing Hey Baby filled rooms with such a refreshing vibe.

It seems like Gwen did not enjoy as much going solo as being with her boys. Love, Angel, Music, Baby and The Sweet Escape were the two albums the female lead singer recorded after the pop band took a break.

Fans immediately retweeted the good news, for some of them, 140 characters were not enough to express their excitement. “To clarify: last year we were in studio mostly writing, just some recording. Starting today back in the studio, mostly recording,” wrote Dumont.

No Doubt’s assistant Tony Kanal revealed on September that the band is planning to return to the stage in a world tour that will coincide with their new album’s release.