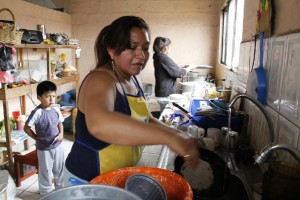 The Coordinating Minister of Social Development, Cecilia Vaca Jones, yesterday clarified that housewives who fail to pay their contributions to the social security (which would be between 2 and 45 dollars a month for 20 years), will not be fined, as indicated by the government in the draft Law on Labor Justice and Labor Recognition of Housework, sent to the National Assembly on November 15 for its discussion and approval.

The Minister noted that there is confusion in Section 43 of the bill, which states: “The employer, the person carrying out unpaid housework and the affiliate without labor relationship are required, without prior counterclaim when applicable, to pay the contributions of the General Compulsory Insurance within a term of fifteen (15) days after the month to which the contributions correspond. In case of failure to comply, the affiliate will be subject of default notwithstanding the employer’s liability that might arise, with subjection to this Act.”

The Minister insisted: “We will have to work on that section,” clarifying that it is not sought to impose fines or prison orders, but the time to access the retirement pension benefit will extend, which in such cases would no longer be 20 years.

Vaca Jones also added that the pension scheme for housewives is voluntary but the ones that access to it could not benefit from mortgages or unsecured loans and, and in case they require it, they would have to activate their unemployment fund, which will mean a greater contribution.

The proposed scheme by the regime would only allow retirement for the elderly, disability and death.