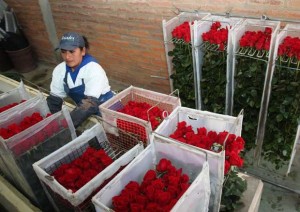 The sales of Ecuadorian flowers to Russia is being affected by the economic crisis Russia is facing, which represent 23% of the total sales, according to reports of delegates from that sector and figures from the Central Bank.

From January to October of 2014, the export growth of this sector registered a fall of 6.4% compared to the same months of 2013. During the previous period, exports grew by 16.3%, according to data provided by the National Association of Producers and Exporters of Flowers of Ecuador (Expoflores).

The low international oil prices, in addition to the US and the European Union sanctions to Russia have plunged the ruble in one of its worst falls since 1998.

Alejandro Martinez, head of Expoflores, noted that this devaluation restricts the consumption of imported products because of its expensiveness.

“This was really serious for us. The scenario has changed dramatically,” said Martinez.

Ecuador announced this Tuesday it plans a trade agreement with the Eurasian Union including Russia, Kazakhstan and Belarus, which would come into effect on January 1 of 2015, in order to diversify exports to that area.