The “Mesa de la Unidad Democratica” (MUD) is the biggest group of opposing political parties in Venezuela. They believe that the treaty between Russia and their country was done without the acknowledgement of the country. This might be a hidden movement against the EE.UU.

During an international tour around several countries critical to U.S. hegemony, Chávez signed a treaty with Moscow to build the first facility of nuclear energy. Washington D.C. soon decide to keep an eye on this decision.

This treaty is clear demonstration on how Chávez government takes decisions without discussing it with the people of Venezuela. MUD officials said that their country has numerous renewable energy resources, and it doesn’t seem important the sudden need for nuclear energy. 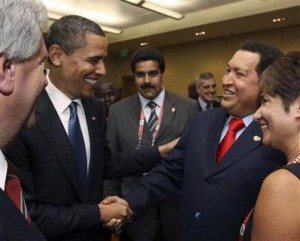 On Tuesday, President Obama said that Venezuela has the right to peacefully develop nuclear power; this does not mean it can turn it into a weapon. Obamab added that the Nuclear Non-Proliferation Treaty “is a policy that applies to all the countries and it must be obeyed.” Saying that Venezuela needs to act responsible, and that is good that they have a strong economy.

Meanwhile the Iranian President, Mahmoud Ahmadinejad, said to Chávez yesterday that together they could defeat their common enemy. This comment reflected his ambition to represent growing countries that are “oppressed” by the West. Ahmadinejad said that Iran and Venezuela are the revolutionary front spreads from America to the east of Asia.