Number of deaths in Greek ferry fire rises to 12 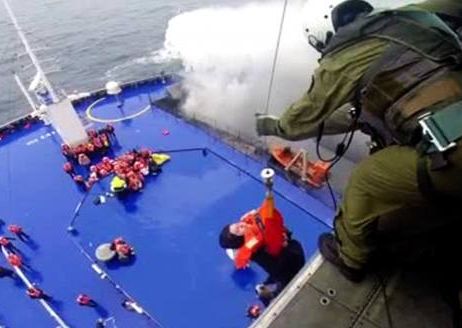 Ten people died in total on Sunday, in the fire at the “Norman Atlantic” ferry, off the Albanian coast on the Adriatic Sea and 427 were rescued, but uncertainty remains about the actual number of passengers on board.

However, an official of the Port Authority of Albania, reported on Tuesday that two Albanians sailors died during the rescue of the ferry, when a cable connecting their boat to the ferry was cut and hit them.

“A man died at the scene when a cable broke after getting stuck in the propeller. The other died a few minutes ago while being treated by medical crew on a helicopter,” told to Reuters an official of the port authority in Vlore.

This last moment accident has raised to 12 the death toll.

After the complete evacuation of the ferry, the Italian Navy said that 427 people were rescued, of 478 that originally were believed to be on aboard the vessel.