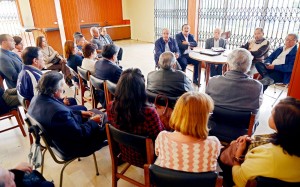 The Defense Front of Retirees is against the new draft law. (Source: El Universo).

The number of workers covered by the social insurance could increase by 48.7% if the Labor Justice and Recognition of the Unpaid Work at Home bill is approved today during the second and final debate of the National Assembly.

Currently, 2’711.742 people are affiliated to the IESS, parallel to 363,313 ascribed to the Rural Social Security, so, with the entry into force of the bill, approximately 1,500,000 housewives would be included to the IESS, of which 400,000 receive social assistance from the government (Human Development Bond).

The bill stipulates that housewives shall pay monthly and for 20 years a contribution according to their socioeconomic situation, which would range between $ 2 and $ 45. Consequently, retirement pensions of this sector would be $ 77 to $ 213 according to the contributions.

However, Cristina Reyes, Assemblywoman from the opposition, and who is a member of the Commission on the Rights of Workers, which processes the law, disagrees with it, because according to her, this is contradictory to the Constitution, which states that is the state the one that must guarantee the welfare of this group of society.

Reyes also states that the state would infringe the workers’ rights by taking money from their profits to fund this proposal. Yesterday, the Defense Front of Retirees protested against the new law, and urged the government to withdraw its representatives from the IESS board, in case of eliminating the state contribution of 40%, by not having involvement whatsoever.