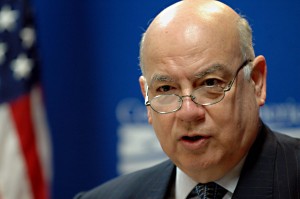 The Secretary General of the OAS, José Miguel Insulza, highlighted during his last speech the “collective effort”, members States and those from the office he manages make to approve “a numerical expression of the priority programs that will guide the work of next year”.

The highest representative of the OAS said that the budget is marked by the approval at the Extraordinary General Assembly of last September of the Strategic Vision of the Organization, and by the submission of the Secretary General to the Permanent Council of the Plan for Management Modernisation at the OAS.

In his analysis of the projection of the new budget, Insulza cited the importance of the Strategic Vision and expressed his “personal satisfaction” because this plan is already adapted to the “conceptual ordering of the objectives” of the organization, the product of a process he launched himself.

He reiterated that this allows to boost the “clear comparative advantage” the hemispheric institution has with regard to other multilateral institutions of the hemisphere in the areas of democracy, human rights, multidimensional security, including in their contributions to the legal field.

The Secretary General stated that the OAS should “grant the projects implementation rather of economic nature to institutions that have such status as the main feature, perhaps reserving a space for areas such as education, in which we will retain comparative advantage”.