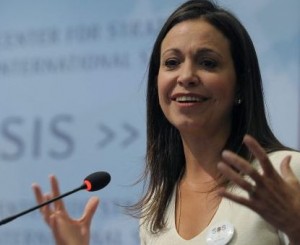 With this maneuver, the Venezuelan officialism tried to invalidate the legitimacy of dissent to the government of President Nicolas Maduro at the regional institution, and prevent the meeting from becoming a speaker of complaints against Chavezism.

“With this action they have demonstrated they fear that the true magnitude of repression in Venezuela is known, but when preventing that a different voice to the regime is heard, they are confessing what is happening in my country,” Machado noted.

Machado urged Latin American governments to “take the collective commitment to the defense of democracy” and called on the organization to invoke the Democratic Charter, require the release of political prisoners and send an observer mission to her country.

The deputy recalled that her future in Venezuela is uncertain since, this Friday morning, the Government warned that her parliamentary immunity had already been raided.