Student protests after arrest of mayors in Venezuela 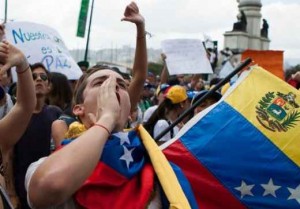 Hundreds of opposition students were concentrated this Thursday in Caracas in protest of the actions taken against two opposition mayors arrested on Wednesday by court order, and the recent incidents in university campuses.

The students were accompanied by political opposition leaders and protesters who tried to march to the headquarters of the Bolivarian National Intelligence Service (Sebin), however when they began the march were surrounded by security forces that dispersed concentration and there were clashes.

“We reject actions that impunity and arbitrarily take the Government against Daniel Ceballos and mayor Scarano,” told to reporter’s student leader Juan Requesens.

The mayors of San Cristóbal (west,) Daniel Ceballos, and San Diego (center), Vicencio Scarano, have been detained since Wednesday in the Ramo Verde military prison on the outskirts of Caracas.

Requesens also denounced “a new tragic toll” in the country by ensuring that this Wednesday about 15 students from the Central University of Venezuela (UCV) were beaten, tortured and stripped by, he claims, “sponsored groups” by the Venezuelan government.