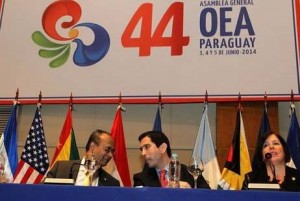 The 44th General Assembly in Asunción, of the Organization of American States (OAS) to be held this week, will receive the highest number of Foreign Ministers in recent years.

The plenary sessions to be held from 3 to 5 June, will have commitments to improve social inclusion and will be signed by all the ministers present at the meeting, as established by the Declaration of Asuncion, said to the AFP news agency the Paraguayan Vice Minister of Foreign Affairs Federico González.

Issues such as the sovereignty of the Falkland Islands, climate change, the fight against drugs and the rights of indigenous peoples are contained in the agenda of the Assembly.

The Deputy Secretary-General Albert Ramdin said that 28 foreign ministers confirmed their attendance, which will make this meeting the General Assembly of highest level since the one held in Honduras in 2009.