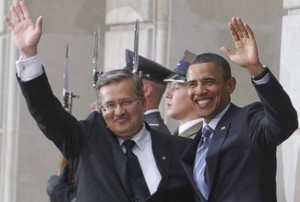 President Barack Obama announced this Tuesday in Warsaw (Poland) an initiative to strengthen military aid to the countries of the eastern flank of NATO, concerned about the actions of Vladimir Putin´s Russia in Ukraine, a country bordering with Poland, and the Ukrainian region annexation to Crimea.

“I have come here,” Obama said in a press conference, “to reaffirm the U.S. commitment with Poland’s security.”

The initiative would force the U.S. Congress to provide up to one billion dollars (over 730 million euros) as additional support to allies who have contributed in forceful and courageous way to the NATO operations, according to a statement from the White House.

Warsaw is the first stage of the Obama’s tour which will continue in Brussels and France, marking the return of Europe as a major concern of the U.S.