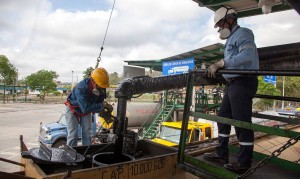 Crude oil production of private companies in Ecuador has fallen this year. Meanwhile, in January these produced 126,200 barrels per day, in October they produced 115,400 (8.5% less), according to the Central Bank of Ecuador (BCE for its Spanish acronym).

Instead, according to the National Information Service (SNI), between 1 and 17 December, the average of private companies stood at 117,100 barrels per day.

In general, public and private production has decreased, going from 557,000 barrels in January to 538,000 in October.

Rene Ortiz, former Minister of Energy, explained that this behavior is mainly due to the failure to pay tariffs involved in contracts for the provision of services and specific services they provide to the state.

The The debt owed by the State to private companies is $ 1,800 million, “and the oil industry, by being capital-intensive, requires investment to continue production,” Ortiz said.

The Government itself acknowledged it has debts with oil suppliers of about $ 1,559 million.