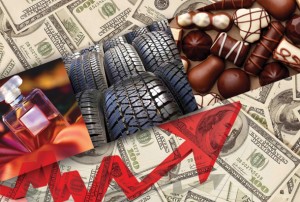 Until November tax revenues increased by 4% compared to the same period of 2014, according to the Internal Revenue Service (SRI for its Spanish acronym).

The agency states that in 2014 $ 12.507 million were raised, a figure that now reaches at $ 13.066 million. Although there is an increase, this increase is $ 421 million less than what was planned, since it was expected to reach $ 13.487 million, according to the Monthly Revenue Revenue of November.

SRI data show that the decline occurred in thirteen types of taxes. These include the Tax on Overseas Remittance, Special Consumption (ICE) of imports and VAT on imports.

The latter two were affected by the reduction of imports. Since March, certain products purchased abroad pay safeguards of up to 45%. These surcharges restrained the import of some products. Imports of consumer goods (such as clothing, personal use technology, vehicles) fell by 16.2%, according to the Central Bank.

However, the money collected by the State for the safeguards charge exceeds the reduction in the VAT and ICE collection.

According to the National Customs Service of Ecuador (Senae) until October about $ 624 million were collected by safeguards and from January to June 2016 it is estimated that another $ 500 million are raised.