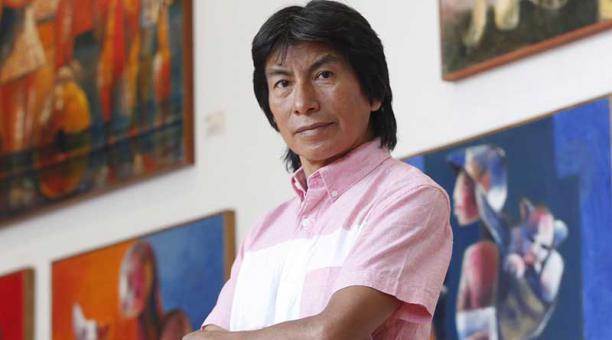 Olmedo Quimbita returns to the House of the Ecuadorian Culture 30 years after having made the first exhibition of his pictorial work in that place.

From the walls of the Eduardo Kingman room hang 40 large-scale works. Techniques in oil and acrylic dominate the retrospective that opened on Friday, March 16 and will be open to the public until next April 16.

The exhibition follows a chronological order in which three creative stages are distinguished. The visual journey begins in 1999, with part of the work produced during his residency in Mexico, which highlights the exuberance of color, in scenes created with rational elements but symbolic intentions in which he would begin to consolidate a language and a personal style .

A second stage coincides with his return to Ecuador, at the beginning of the new millennium, in which he undergoes a transition in the colors of his palette, with cold and wet colors to portray the Amazon and warm tones that predominate in the images of the Litoral.

Women, musical instruments, plants, creatures and marine landscapes are recurrent, as is the rooster, a symbol in which the artist projects a sense of freedom.

The idea of migration, identity and miscegenation is also decided in this creative period.

The third stage starts with the birth of Sofia, her daughter. Childhood, motherhood, family, tenderness and innocence correspond with more subtle tones. Quimbita’s work offers multiple layers of reading, which go from the literal to the spiritual meaning, where light and its control become a distinctive feature. (I)