Every morning, from 06:00, Alberto Acosta sprinkles lime at the entrance of the Los Ángeles banana farm, located in the compound of the same name in the Simón Bolívar canton, in Guayas. 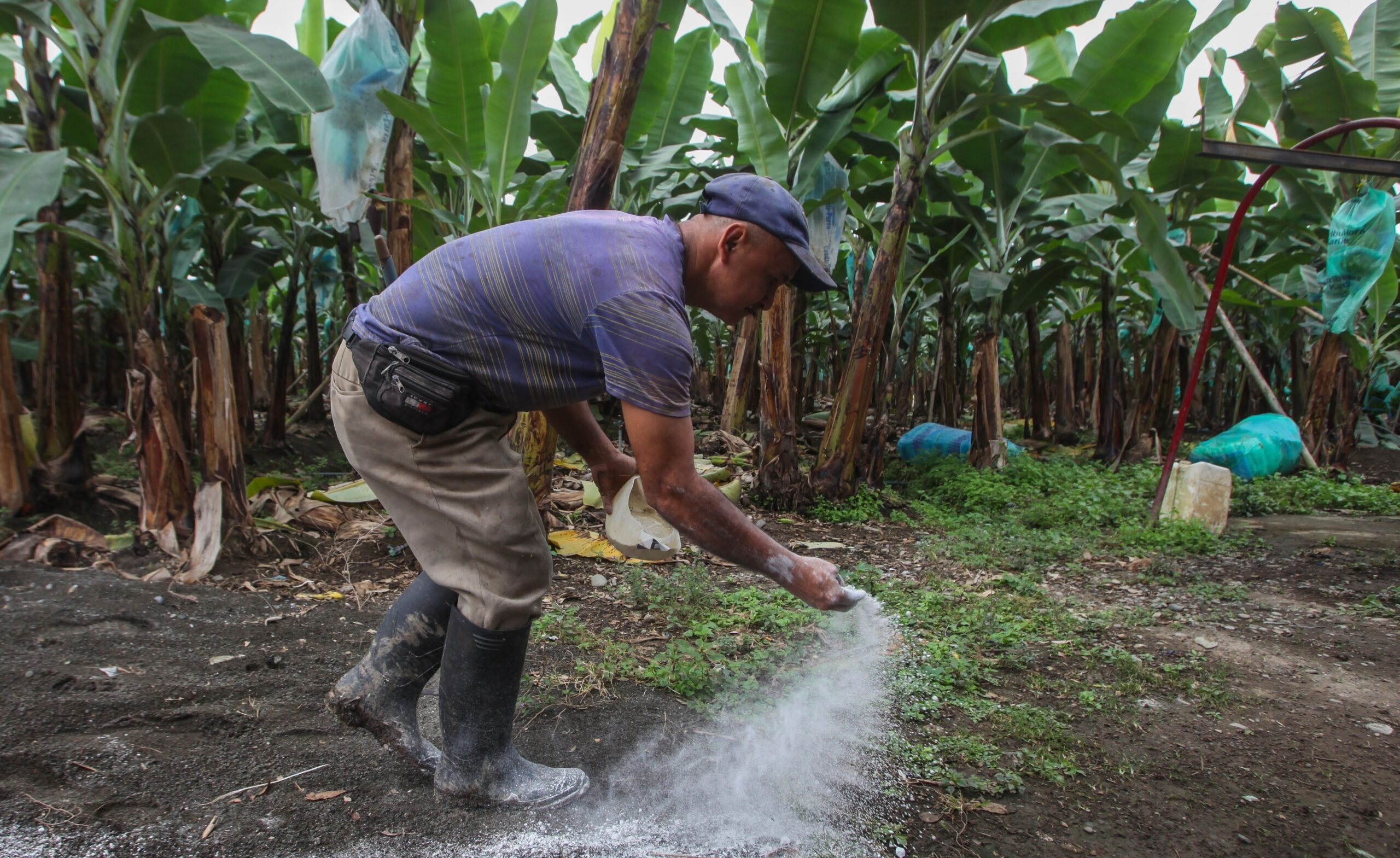 This measure and the washing of hands and arms are the only actions that have been carried out since 2019 to protect the property from a possible arrival in the country of Fusarium Race 4.

Immune to the action of pesticides, this fungus threatens to destroy fruit plantations.

In Ecuador, only 13% of the Musaceae producing areas (banana, plantain, orito, among others) have complete infrastructure related to biosecurity measures against Fusarium Race 4.

In other words, some 45,000 out of 350,000 hectares planted nationwide have cleaning stations, waste catchment areas and regularly fumigate. On the other hand, another 22% comply only with some of the biosafety measures.

The Banana Cluster, which groups five organizations of producers and exporters of the fruit, pointed out that these figures are worrying and, in fact, are underestimated.

Acosta takes handfuls of the white powder from a small sack. With the lime, it forms a line on the ground, right in the space between the street and the packing area.

When the work is finished, the material that is left in his hands, he throws it into his boots.

These tasks began when the alarm was raised by the presence of Race 4 in Colombia, two years ago.

Jonathan Ortiz, small producer and owner of the farm, recognizes that the pest is dangerous and more devastating than the black leaf streak, since although the crop dies, the pathogen is able to survive and spread in neighboring plantations.

Ortiz says that he was going to fence the farm and build a foot disinfection area (footbath). The investment for these jobs was USD 9,000 and they were to be carried out at the end of 2019, but the money was not completed. Now he aspires to get a loan to equip himself.

Eight people work on the farm and each week they process around 450 boxes, on 7 hectares. “With the pandemic and the disrespect for payment of the official price of the banana box, the projects to put biosafety infrastructure remained on paper.”

A few kilometers from this farm is the farm of Alexander Mejía, a medium-sized banana producer that has 23 hectares. Unlike Ortiz, this banana company stopped taking actions against Fusarium.

Mejía says that until January of last year he was spraying vehicles and people with quaternary ammonium before entering the farm. The tasks were done with backpack pumps and had a monthly cost of almost USD 300.

But the situation got complicated when they stopped paying the official price of the box, the costs of supplies and fuels went up. “We cannot make that expense, when we need supplies that are becoming more and more expensive.”

The State Portfolio maintains a process of dissemination and monitoring of the implementation of biosecurity measures and conducts field monitoring to detect any news about the pest.

Meanwhile, the risk is getting closer. Last April, the plague was detected in Piura, northern Peru.

The MAG set up four technical tables since July to address the problem of Fusarium Race 4, and until the end of August it plans to have an emergency plan to prevent the entry of the fungus. One of the tables is for financing, to define lines of credit and financial incentives for the farms to equip themselves.

The prefectures of the producing areas, such as El Oro, Los Ríos and Guayas, carry out information campaigns with banana growers, especially with the smallest ones, to warn of the risk that the devastating plague implies reaching Ecuador. MAG is also working on the process so that a variety resistant to Fusarium Race 4 can be imported.