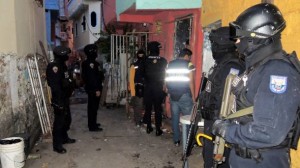 An apparent leak of information, according to the police, prevented the alleged leader of a gang engaged in kidnapping, assault, robbery and microtrafficking to be captured.

The operation was performed yesterday´s dawn in the cooperative Nuevo Ecuador,_ located in the Trinitaria Island sector, in southern Guayaquil.

During the police action seven houses were raided. In some of them officers found a gun, a scale (that apparently was used to weigh drugs), bags and other tools that allegedly were used for the sale of the alkaloids.