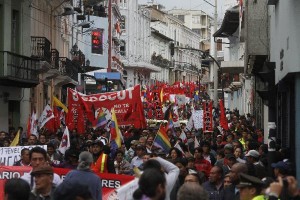 On Thursday March 17th, several social sectors and opposition groups led a demonstration against government policies. The leaders pointed out that this will not be the only one mobilization, so they informed they will also take to the streets on May 1st.

According to statements of the leaders in various media, the reasons for these protests is their dissatisfaction with some policies imposed by the government of President Rafael Correa.

Precisely in Thursday’s march the approval of labor reformswas rejected, which they consider do not favor workers. Social and trade union organizations against the Labor Law; and those represented by Pablo Serrano, president of the Unitary Workers Front (FUT), also prepare a claim of unconstitutionality and international demands.

Union leader Nelson Erazo says they are preparing a new mobilization all over the country for May 1st, on Labor Day.

According to opponents of the ruling party, Last Thursday´s marches were peaceful because there was no response (countermarch), on the part of Alianza PAIS.

For his part, President Correa described the march as “a failure” and reproached this fact, since it had been planned since January 2016.