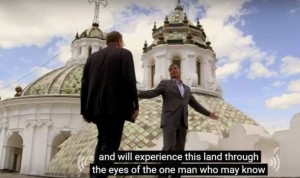 Images of a marine iguana resting on a rock, a Galapagos turtle and a blue-footed booby sweeten the eyes of those who watch the promotional video of the Ecuadorian edition of the The Royal Tour television show, to be released on April 14 in the public channel PBS (public Broadcasting Service) in the United States.

The voiceover that accompanies the postcards speaks of Ecuador as a country of stunning contrasts, while showing the natural scenery of its four regions, President Rafael Correa emerges as the protagonist.

The Check Six Productions production company Inc. develops the programs with private capital. In the case of Ecuador, according to documents from the Ministry of Tourism (Mintur), five companies contributed with the resources for the implementation of The Royal Tour, a project considered by the Ministry as “of interest for the Ecuadorian government” and that began with the former Minister Sandra Naranjo, in February 2015.(I)