Opposition calls for new protests in Venezuela, Maduro says they are a minority 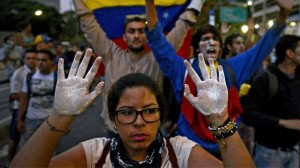 The Moderate Sweden Party and the People’s Party of Spain, in an emergency resolution to the Congress of the European People’s Party,  proposed that the situation of Venezuela is concerned, therefore, President Nicolas Maduro was called to stop the repression against peaceful protests, to reléase Leopoldo Lopez and arrested in demonstrations, and to stop censorship on freedom of expression .

Concerns about suppressions on protests begun by students on February 12th to demand a solution to the socio-economic problems faced by Venezuelans, were also expressed.

In an interview with Christiane Amanpour , a journalist from the U.S. network CNN, Maduro states that ” a minority ” of the Venezuelan opposition is responsible for the violent protests that have been generated in the country, since not all sectors opposed to his government are ” fascists.”

Meanwhile, today March 8th, Henrique Capriles, leads a concentration in which it is announced a massive and ” pot-banging ” protest against food and products scarcity.