Other crimes in addition to the police transfers 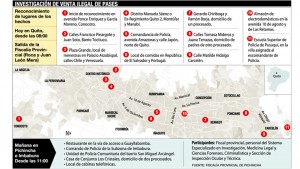 New crimes will be investigated by the prosecution in the case of the alleged illegal sale of transfers within the police. So far, those involved were inquired for organized crime.

The reason? The prosecution also considers that the destination of the money and the accomplices must be investigated. Prosecutor Wilson Toainga ordered new investigations.

In the next few hours, it will also appoint an expert to extract information from a video circulating on social networks. There, two police describe how the network in charge of the alleged illegal sale of transfers operated. Toainga received authorization from the Court of Pichincha for this diligence.

At the moment there are 28 people prosecuted. Including former police chief Fausto Tamayo. A lieutenant -who worked in the Presidency and the Ministry of the Interior and was 30S hero-  is the suspected leader of the organization. The sale of around 5,000 transfers have generated about six million dollars.