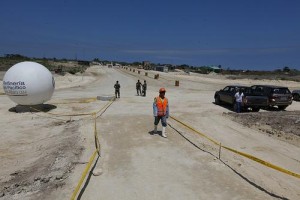 Negotiations to get about $ 13 billion to finance the Pacific Refinery are well advanced with companies and Korean and Chinese banks, and it is expected that this international support is materialized this year, said Rafael Poveda, Coordinator Minister of Strategic Sectors.

He said that the regime is still optimistic about the support, and preliminary works like the aqueduct, built from La Esperanza to the area where the new refinery will be structured, have already been implemented.

He added that the aqueduct, that will benefit some cities of Manabi, would be ready in September.

The search for the $ 13 billion continues, asserted Poveda, who noted that another strategic partner of this project such as Venezuela, has done its part.

The exchange rate stamp has a “legal basis”