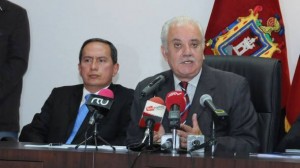 Pacifico and Pichincha banks are part of a strategic alliance with the General Attorney whose purpose is to prevent the entry of money from illicit transactions (money laundering or legitimization of illegal capital) to the national financial system.

Experts from both institutions will become official agents of the State to join the Money Laundering Unit team, created by the Prosecutor office in October 2014.

The agreement was announced yesterday by the Attorney General, Galo Chiriboga, and the executives of Pacifico and Pichincha banks, Efrain Vieira and Antonio Acosta, and the authorities of the UAF, the Superintendency of Banks and the Internal Revenue Service (SRI for its Spanish acronym).

Chiriboga said that, for the crime of money laundering, there are 15 sentences of 132 processes; the remaining cases are still in inquiry.

Denmark: shooting in Islamism and freedom of expression forum left 1 dead and 3 injured