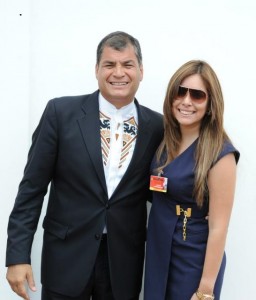 Journalist Enrique Rosales Ortega made a serious complaint against Vanessa Fajardo, Assemblywoman of Alianza PAIS for the province of Santa Elena.

In a radio interview Rosales Ortega frontally accused Assemblywoman Vanessa Fajardo for influence peddling, he said she “is an employment agency in the province of Santa Elena and gets paid for these positions.” “That young lady manages hospitals and some institutions.”

The journalist also noted that these irregularities are ‘vox populi’ in the province of Santa Elena but people fear of denouncing this because they believe she is an influential person, who has friends in the circle of power, as Interior Minister and the Attorney General.