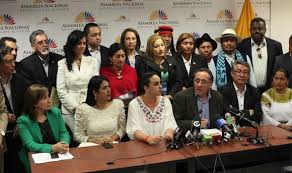 Alianza PAIS raised 18 amendments to the Constitution with modifications of 16 articles, a transitional provision and adding another single transient. The text was defined yesterday and was delivered to the Legislative Council of Administration (CAL for its Spanish acronym), which meets today in the Assembly, to qualify it. The constitutional judges must determine the validity of the changes proposed and decide whether the process will be via amendment or reform. In the case of being under the figure of reform, it would require a referendum. The text refers to the duties of the State to ensure rights, such as security, retirement, non-discrimination. The powers and duties that the Constitution provides for instances that are involved in the amendment are described.