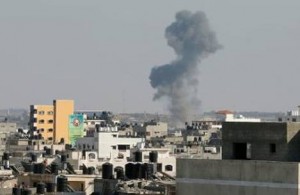 The launch of three rockets by Palestinian militants into southern Israel and the warlike response in this country today collapsed the dialogue in search of a permanent ceasefire which was held in Cairo.

According to the newspaper “Haaretz” be known nothing else the shots, Israeli Prime Minister Benjamin Netanyahu ordered the delegation that negotiate for days in the Egyptian capital to return to the country.

Netanyahu ordered the Israeli army “attacking terrorist targets in Gaza,” according to a source who requested anonymity.

The military spokesman Peter Lerner said in a statement than in response to aggression, “the military will continue to attack terrorist infrastructure and eliminating their ability in Gaza to restore security in the State of Israel” without revealing the sites to be attacked

So far there have been no fatalities, but it has been reported that two Palestinian children were injured in the town of Rafah.

Funds Law will be postponed until September